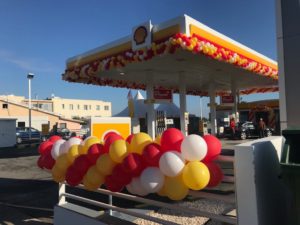 Objective: Another Opening Event for pr:partners & the 20th SHELL Retail Station in Cyprus. Our aim was to promote the new SHELL Retail shop opening at Artemidos 67 in Larnaka and to create the right amount of buzz & excitement around the opening of the station.

Description: We organised an Opening event at the new SHELL Retail Station in Larnaka, creating an atmosphere of celebration & engagement of our audience before, during and after the event. With targeted publicity, such as a Live Link, a radio competition and TV coverage we managed to gain the exposure we were expecting to see.

In order to make it even more interesting for the audience, we had a red Ferrari car parked on site, while we were giving out SHELL branded giveaways to the customers.